Skip to main content Search this website
The Hall of Fame will be closed on Sunday, May 16th for a private event.
1-877-4-HOOPLA

SAN ANTONIO, TX – Today, at a press event presented by Haggar Clothing Company, the Naismith Memorial Basketball Hall of Fame announced the 13 members of the Class of 2018 to be honored September 6-8, 2018 during this year’s Enshrinement festivities in Springfield, Massachusetts. The Class Announcement was made in San Antonio, Texas the site of the 2018 NCAA Men’s Final Four and televised live on ESPN2.

Distinguished committees focused on preserving all areas from the game also selected five directly elected members. They include Charlie Scott from the Veterans Committee, Dino Radja from the International Committee, Ora Mae Washington from the Early African American Pioneers Committee, and Rod Thorn and Rick Welts from the Contributor Committee.

“The Basketball Hall of Fame is proud to honor the best in the game, both men and women at all levels and throughout the world,” said John L. Doleva, President and CEO of the Naismith Memorial Basketball Hall of Fame. “The Class of 2018 is a remarkable bunch with accolades spanning decades and continents. As players, coaches, and executives, we thank them for their contributions to the game and look forward to honoring them during Enshrinement this fall.”

To be elected, North American and Women’s Committee finalists must receive 18 of 24 votes from the Honors Committee for election into the Naismith Memorial Basketball Hall of Fame. Direct elect committees are incorporated into the election process to maintain a strong focus on keeping history on the forefront of the voting procedures and to preserve a balance between two eras of basketball.

The Class of 2018 will be enshrined on Friday, September 7 in Springfield, Massachusetts, the home of the Naismith Memorial Basketball Hall of Fame. Ticket packages to the 2018 Enshrinement Ceremony, presented by NIKE and all Enshrinement events are on sale now and available online at www.hoophall.com or by calling the Basketball Hall of Fame at (413) 231-5513.  Premium Sponsors of Enshrinement 2018 include Haggar Clothing Company, Zales, Nike, Mohegan Sun and Panini.

THE NAISMITH MEMORIAL BASKETBALL HALL OF FAME CLASS OF 2018:

MAURICE CHEEKS [Player] – Since 1978, Cheeks has been involved with the NBA as either a player or a coach. He is a four-time NBA All-Star (1983, 1986-1988), a four-time NBA All-Defensive team selection (1983-86), and a member of the 1983 NBA Champion Philadelphia 76ers. After a 15-year professional playing career, Cheeks retired fifth on the NBA career list for both assists (7,392) and steals (2,310). A native of Chicago, Cheeks played collegiately as West Texas State College (1974-1978), where he was a two-time All-Conference player. Cheeks is currently an assistant coach for the Oklahoma City Thunder.

CHARLES “LEFTY’ DRIESELL [Coach] – A native of Norfolk, Virginia and graduate of Duke University, Driesell is the only coach in NCAA history to win 100 games at four different schools and just one of 11 coaches to lead four schools to the NCAA Tournament. He is the only coach in NCAA history to be named Conference Coach of the Year in four different conferences and is known at the inventor of the “Midnight Madness” concept. Driesell currently ranks 12th among Division I coaches in all-time victories with an overall coaching record of 786-394 (.666). His teams have appeared in 21 postseason tournaments (13 NCAA, 8 NIT). Driesell received the NCAA Award of Valor in 1974 after saving children from a house fire and was inducted in the College Basketball Hall of Fame in 2007.

ROD THORN [Contributor] – Rod Thorn has been a fixture in professional basketball for over 50 years as a player, coach and executive. He played eight years in the NBA (1963-1971) and was a member of the NBA All-Rookie Team in 1964. Upon retirement, Thorn had coaching stints in both the NBA and ABA, winning an ABA championship in 1974 with Julius Erving. In 1978, Thorn became general manager of the Chicago Bulls and was instrumental in the team’s selection of Michael Jordan in 1984. From 1986 to 2000, he served as the NBA’s Executive Vice President of Basketball Operations while also being the Chair of the Senior Men’s Basketball Committee for USA Basketball (1992- 2000). Thorn joined the Nets in 2000, where he earned Executive of the Year honors in 2002. In 2010, Thorn was announced as the 76ers President of Basketball Operations, a position he held for 3 years before returning to the NBA league office as President of Basketball Operations in 2013. In 2015, Thorn received the Bunn Lifetime Achievement Award.

RICK WELTS [Contributor] – Rick Welts is a National Basketball Association executive credited with transforming the NBA All-Star game into what the extended mega-event NBA All-Star Weekend is today. With 40 years of experience, Welts got his start in the league as a ballboy for the Seattle SuperSonics, eventually rising to Director or Public Relations for the team and moving on to numerous leadership positions including NBA Executive Vice-President and CMO (1996-1999), President and CEO of the Phoenix Suns (2009-2011), and President and COO of the Golden State Warriors (2011-Present). He played a key role in the organization of international preseason games and the opening of international NBA offices. Welts developed the marketing campaign for the 1992 Barcelona Olympics “Dream Team” and in 1998 was named Brandweek’s Marketer of the Year for his work on the launch of the WNBA.

ORA MAE WASHINGTON [Player] – Ora Mae Washington was born in 1898 and was arguably the greatest female athlete of her time. Playing with the Germantown Hornets and Philadelphia Tribunes, she was a part of 11 straight Women’s Colored Basketball Championship teams, while serving as the team’s center, leading scorer and coach. In 18 years, her team lost just six games total – all to men’s teams. Washington was also a world class tennis player winning nationals singles titles in the All Black American Tennis Association eight times and 12 straight doubles championships. Her career was unfortunately limited by rules that prohibited her from competing against the top white players and she retired from sports in the mid-1940s. Washington influenced future generations of female athletes, including Althea Gibson, the first person of color to win a Grand Slam.

DINO RADJA [Player] – Dino Radja is a Croatian professional basketball player who played four memorable seasons with the NBA’s Boston Celtics, but spent the majority of his career in Europe. He led his teams to several championships, always a winner no matter where he played. Radja won three straight European League titles, finished second for the Euroscar three times, and earned gold medals at the 1989 and 1991 European Championships. As Olympian, he helped secure silver medals for Yugoslavia in 1988 and the new Croatian team in 1992. Radja was named the Greek League Final MVP (1998) and the EuroLeague Final Four MVP (1989), as well as one of FIBA’s 50 Greatest Players in 1991 and one of the 50 Greatest EuroLeague Contributors in 2008.

CHARLIE SCOTT [Player] – Charlie Scott was a five-time All-Star during his professional career in both the American Basketball Association (1970-1972) and the National Basketball Association (1972-1980). In his two ABA seasons, he earned Rookie of the Year and averaged a lead record 34.6 points per game in his second ABA season. He has since been named to the 30-man ABA All-Time Team. Scott joined the NBA in 1972, winning a championship with the Boston Celtics in 1976. Scott was the first African American scholarship athlete at the University of North Carolina, where he was a two-time All American. He led his team to back-to-back Final Four appearances with legendary coach Dean Smith. 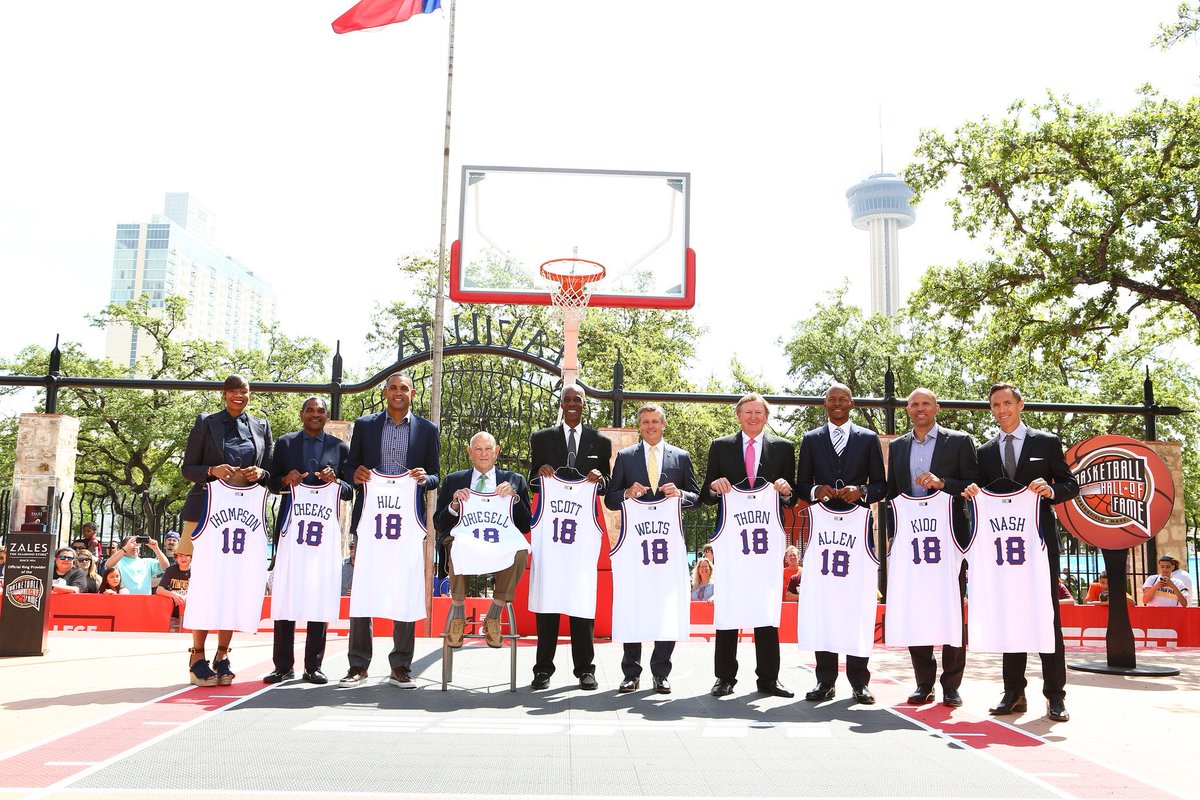